I have a confession. I came very late to the Schitt’s Creek party, but in doing so, it has proven to be the perfect isolation viewing―and I consumed all six seasons in a matter of months. It was like molten chocolate for my brain. 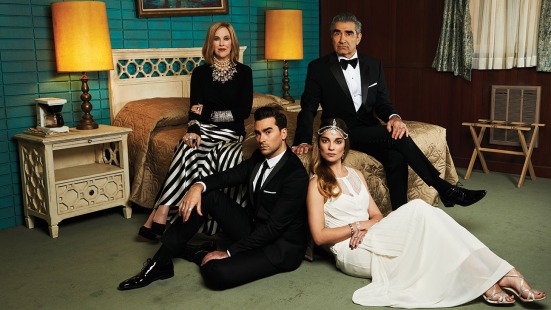 But that’s not what this blog post is about.

Schitt’s Creek is the perfect TV show for a romantic comedy author, and here’s why…

[SPOILER ALERT: I will be as judicious with spoilers as possible, but if you hate them entirely, stop reading now.]

Having devoured the entire series over a short period of time―seriously, how did early adopters wait out those long periods of no new episodes for the past 6 years?―the character arcs were heightened for me.

When we meet the Roses, they have just lost their billion-dollar empire to a Ponzi scheme and when they realise they ‘bought’ a town in the middle of nowhere on a lark―just because the name was funny―Schitt’s Creek―they move there. They take up residence in two adjacent motel rooms, parents in one and adult children in the other, as though they are not in their late-20s and early-30s.

The Roses are spoilt, entitled, vacuous, and completely unlikeable―fish out of water in the most perfect, beautiful way.

What ensues over the course of 6 seasons is an unveiling of humility, humanity, and tight familial bonds. And, as a viewer, you come to love them all.

I posted recently about ‘Writing the Unlikeable Character‘ and there are two factors that are key in winning over the reader or viewer.

First, the character―initially repellent―must transform. They must self-reflect, learn lessons, and decide they want to be a better person.

Second, we must see the character’s vulnerabilities, their motivations and objectives, the backstory that explains why they are the way they are. It’s the chinks in the armour that that endear these characters to us as readers or viewers.

I cried so many times watching this show, but here are some fave moments of vulnerability.

The final episode of the series had me weeping. I loved these characters entirely and I championed their happiness.

I love a good ensemble, character-driven comedy (Brooklyn 99 is a fave) but (for me) what sets this show apart from others is that all four lead actors―and many of the supporting actors―are, quite simply, comic geniuses.

Their skills as actors lead to authentic comedy. There aren’t snazzy rim-shot one-liners, there’s no need for a laugh track. It is just hilarious. I laughed aloud―like a proper, throw my head back laugh―every episode.

The comedy in Schitt’s Creek comes from the whole (character) self―the vocal tones and intonations, the facial expressions, the gestures and postures, the pauses―as much as it comes from the lines.

Though the lines are brilliant.

David to Moira after she is insensitive to Alexis’ break-up: “I have never heard someone say so many wrong things one after the other, [pause] consecutively, [pause] in a row.” You can get that quote on a T-shirt. But what makes the line is the pause Daniel Levy (as David) incredulously takes before he says it, the pauses in the line to drive home David’s meaning, and the horror on his face. Genius.

Catherine O’Hara’s Moira is incredibly funny―her appearance, her dialogue, her gait, the intonation of her bizarre affected accent. There’s a whole compilation on YouTube of every time she says ‘baby‘. I laugh when she appears on screen, girding my comic loins for whatever is to come. 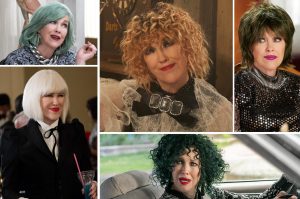 And Alexis’ posture, gestures and facial expressions, Johnny’s raised eyebrows and confused smile―all of these comic nuggets is a masterclass in developing a fully-fleshed-out comedic character.

As a writer of romcoms, I aim to pepper my stories with authentic comedy―the humour coming from the ridiculous real-life situations that make us laugh at ourselves, either in the moment or in retrospect. And I can enhance comedic moments by hitting on all the details that make them up, not just the dialogue―just like in Schitt’s Creek.

Romantic love is one of the dominant themes in Schitt’s Creek.

At the heart of the show is the great love affair of Johnny and Moira―forty years and counting―and every time Moira mentions how they met, or remembers a romantic interlude, her eyes sparkle.

And, surely, only someone who is completely in love with Moira would be as patient and loving towards her as Johnny is. Moira tells Alexis, when she’s facing a love conundrum, that she and Johnny work so well despite their differences, because they want the best for each other and they love and respect each other. Swoon.

[Major spoiler]Patrick is the perfect love interest for David. Their love story is so romantic, so genuine, that when David doubted he was worthy of Patrick’s love, I wanted to reach into the TV and shake him. These are two people who truly see each other, and they are both better people for the love they share. Swoon. 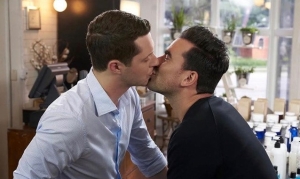 [Major spoiler]Watching Alexis fall in love was like watching a toddler take their first steps. Her relationship with Ted begins superficially―he’s the hottest guy in town, so ‘obvs’ she is going to pair up with him. It’s only when she loses him that she realises how kind, thoughtful, generous and incredible he is. When she gets a second chance, she does everything she can not to screw it up―including agreeing to live overseas in a tent―and ultimately realises that she loves him enough to let him go. Selfless, real, and heartbreaking love. Swoon and sob.

Even Roland and Jocelyn are madly in love, which provides it’s own comedy, because, really, Jocelyn? Roland???

At some point (probably soon, as we have just gone into our second lockdown here in Melbourne) I will start at the beginning and watch it all again―this time with fresh eyes as a masterclass in the romantic comedy genre.