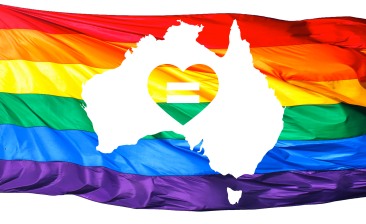 Our (ridiculous) government has gone through with an expensive plan to survey Australians, asking, “Should the law be changed to allow same-sex couples to marry?”

In the context of the discussions and campaigns associated with this survey, I’ve been told – and I have read and I have heard and seen – that ‘everyone is entitled to their opinion’ on this matter. This rhetoric is typically used to defend a ‘No’ response to the survey question posed by our (ridiculous) government.

Here’s where that breaks down for me. This is not an opinion-based survey. This is a survey of our deep-seated  ideological beliefs. Because at the core of that question is, ‘Do you believe that all humans should have the same rights?’ This is a human rights issue, and the Australian government should have passed a law guaranteeing all Australians the right to marry years ago. It baffles and angers me that it has come to this.

Well, here we are, having a national discussion about whether or not an entire demographic of Australians are equal to the rest of Australians. That’s why I’m angry.

And the only reason I can think of for a person to vote ‘No’, is because their deep-seated ideologies tell them that they are superior to others, and that some others do not deserve the same human rights as they do.

But what if homosexuality is against their religion, and they are deeply religious and a ‘Yes’ would be contrary to all they believe?

I’ve given this a lot of thought too. I was raised in a Christian religion that is (wayyyy) far right of centre. I learned that homosexuality – along with a host of other things – was sinful. I have since unlearned this, by the way. I never learned, however, that I should hate homosexuals, nor think that God loved them any less than he loved me.

If you truly believe that your God wants you to hate other people or think that they are less than you are, or that your God loves you more than others because you hold true to his (or her) teachings, then theologically-speaking, you’re doing it wrong.

You can be (highly) religious, believe that homosexuality is a sin, and still believe that all people deserve to have the same rights. Many people who have voted yes are religious.

But what about the sanctity of marriage?

Let’s talk about that. We have a domestic violence problem in Australia. It is rampant, and ugly, and the majority of victims – male and female – are afraid to speak up. As a nation, we seem not to know what to do to eradicate domestic violence, but we do seem to agree that it is a blight on our society.

But never once has their been a discussion (or a survey!) about whether or not perpetrators of domestic violence, people with a blatant disregard for the sanctity of marriage, should have their right to marry removed (a discussion for another time perhaps). So, does the so-called ‘sanctity of marriage’ argument really deserve to be rolled out by a nation that allows perpetrators of domestic violence to marry?

So, no, I don’t accept that this is an opinion-based survey.

Rather, what our (ridiculous) government has done by purporting that this survey is to gauge our opinion on what is essentially a human rights issue, is to normalise bigotry.

Everyone is entitled to their opinion, sure. But, I’m not okay with calling a this an opinion-based survey when it’s not.

And that’s why I’m angry.