I have the great pleasure of being a (small) part of the launch of my friend Lucy’s debut novel, Make It Up to You, an entertaining and sexy read which romcom and chicklit lovers will adore! I am sharing a scene from Chapter 4 (scroll down), but first …

Lucy Keeling is an author writing fun, sexy, stories with all of the happily ever afters. When she’s not typing at the kitchen table, she’s arranging and then re-arranging to see her friends for the occasional spot of day drinking. Lucy is currently writing the third book in a contemporary romance series, the first of which was runner-up in Choc Lit’s ‘Search for a Star’ competition which was sponsored by Your Cat magazine.

Lucy lives in Greater Manchester with her family.

About Make It Up to You 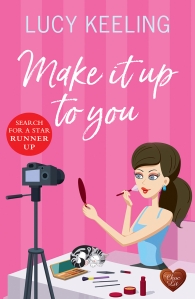 What do mascara wands and gardening shears have in common? Absolutely nothing! At least that’s what wannabe beauty influencer Sophie Timney thinks when her friend Polly suggests involving her brother Marcus in Sophie’s make-up tutorials. She needs more views, Marcus needs promotion for his gardening business – in Polly’s mind joining forces will help them both. Sophie isn’t so sure.

Because Marcus Bowman has a habit of getting under her skin in a way that no exfoliating face scrub ever could. But, as the views and comments on her videos begin creeping up, it becomes increasingly obvious that Sophie’s subscribers like Marcus, and what’s even worse is that Sophie might be starting to feel the same way …

A scene from Chapter Four to whet your appetite

Sophie took a deep breath and— KNOCK KNOCK. She rolled her eyes and hit pause. As she stepped away from the table she assumed it would probably be another delivery for Mya. Or maybe it would be a parcel for herself, maybe some fabulous new make-up brand wanted to send her loads of free stuff so that she could review it for them. The idea made her smile wide as she pulled the door open. Her smile ran down off her face faster than cheap mascara and wine crying as she saw Marcus standing there. He was looking over his shoulder at his van, so she took the opportunity to quickly give him the once-over. He had a cap covering his hair, a plain grey T-shirt that clung unnecessarily tightly showing his muscular arms, and was that a six-pack? He had on cargo shorts, the ones with the obscene amount of pockets – like really, if you need to carry that many things get a bag – finished off with thick socks and work boots. He was quite tanned and for a minute Sophie wondered what fake tan he was using.

‘Hi, I thought I would come and take some… erm, measurements.’

Marcus was looking at Sophie with a strange look on his face. Sophie felt herself redden. Had he realised she was checking him out? Well, not checking him out, she reasoned with herself, more giving him a professional once over as was a requirement of her job. She realised she was looking at his T-shirt again, trying to see if she could make out any more muscle definition. With a cough she looked back up, telling herself to get her act together.

‘I didn’t know you were coming today. I’m actually working.’

‘That’s OK.’ Marcus stepped over the threshold and around Sophie. ‘I just need to take some measurements, just go ahead and carry on doing your work.’

The way he said ‘work’ made Sophie’s lip curl. She took a breath as she remembered she had promised herself to stop letting Marcus antagonise her. Cheeky git had stopped to put the kettle on, on his way to the garden. There was a back door through the kitchen itself to a side entrance, as well as the French doors behind the table she was currently working at. Fuming, but trying to remain calm and mature, Sophie went back to the table to go over her notes regarding what she had been recording, and what products she was reviewing. Next she would need to look at how best to title and tag the videos for her social media. Well, she was trying to, but it wasn’t working.

With her back to the French doors, it was very unsettling knowing that Marcus was behind her. She couldn’t read the notes that she had written, and she was fidgeting in her seat. Was he looking at her? Could she turn around and look at him? She should’ve kept the curtains closed after all. Deciding that it was her garden – well Mya’s – she could look at whatever she wanted to look at, whenever she wanted to look at it. She turned around. He was at the bottom of the garden with his phone, clipboard, pencil and tape measure. He was clearly just getting on with his work, which just made Sophie mad. Why was she so affected by his presence, and on what planet did he go around being the professional one?

Where can you get it?

Congratulations, Lucy! I’m looking forward to the next two books in the series!

2 thoughts on “Make It Up to You by Lucy Keeling”

I'm in love with this notebook from @dervyhalil Makes my working life even brighter. #stationeryaddict #lovemydayjob❤️️
Hoping this rain is also hitting #bushfire affected regions.
So this just happened. My debut book with @onemorechapterhc just rocketed up the US Amazon charts to the Top 700. I am beyond excited as my highest ranking before was in the 50000s. Squeeee. #romcom #romancenovel #romancereads #romancereader #romcombooks
Expecting that this photo from the #sagawards2020 may just break the internet. #jenniferaniston #bradpitt #reunion #winners 😍😍😍😍😍
#shakespeare in the park with the #australianshakespearecompany #Hamlet
%d bloggers like this: