It’s that time of the year! Solstice!!!

I am excited to be participating in the Summer Solstice Read-along. 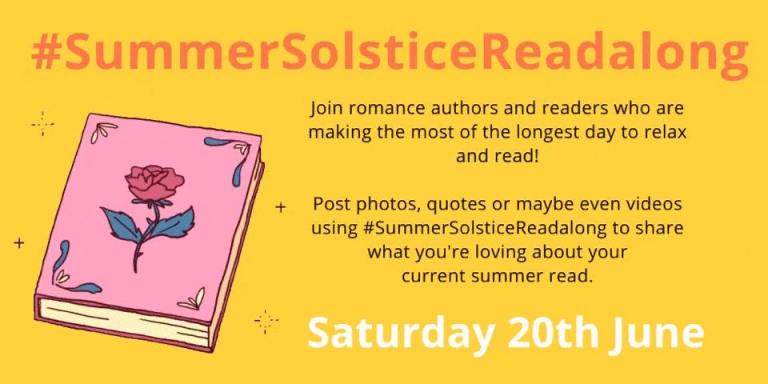 ‘But, Sandy, aren’t you in Australia?’ I hear you ask. Why, yes, I am, but I always celebrate Winter solstice each year, as even though we’re less than a month into Winter by now, the days will start to get longer – something to be grateful for when you are a Summer lover like I am.

So, for the inaugural Summer Solstice Read-along, organised by the fabulous Emma Jackson, there are 15 romance authors who have all swapped books. I am reading Lynne Shelby’s latest, The Summer of Taking Chances. I’ve loved Lynne’s previous books and this was no exception! Such a great read and I will tell you why in just a moment.

It’s been ten years since Emma Stevens last laid eyes on Jake Murray. When he left the small seaside village of South Quay to chase the limelight, Emma’s dreams left with him.

Now Emma is content living a quiet and uneventful life in South Quay. It’s far from the life she imagined, but at least her job at the local hotel has helped heal her broken heart.

But when Jake returns home for the summer to escape the spotlight, Emma’s feelings quickly come flooding back. There’s clearly a connection between them, but Jake has damaged her heart once already – will she ever be able to give him a second chance?

You will fall back in love with life in this wonderful, romantic story of second chances. I’m a lover of all things theatre, especially Shakespeare, so the small town production of Romeo and Juliet was a wonderful thread throughout this story. I absolutely loved the cast of characters, especially Emma, who lost sight of her dream, and was a heroine to champion!

This is a deep dive into the themes of second chances, being true to yourself and following your dreams.

Where can you get it?

For those who need a little escape (and don’t we all), check out the very clever and funny Claire ‘Fluff’ Llewellyn’s Rhyme and Reason. 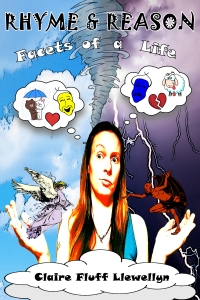 Read all about it

A collection of rhymes for troubling times; reaching out to the weary with a virtual hug!
From poems about sleep to murderous sheep! It’s an eclectic mix of sincerity, sentiment, satire and silliness, served up as three “facets of life”: LIFE, LOVE, LAUGHTER. Share in the joy & sorrow, or re-live your own!

Life’s a roller-coaster of ups & downs, smiles & frowns. Won’t you take a ride in rhyme?

Where do you get it?

And for those who purchase the book, there is a competition over at Claire’s Facebook page!

I am super excited to welcome back Fiona Leitch, the “mashup maven”. As well as adoring her, I am in awe of her incredible ability to combine my two favourite genres, Crime Fiction and Romance!

She has a new book coming out in a couple of weeks, and this is one not to miss because it’s the sequel to one of my fave books from 2019, Dead in Venice. It’s called Murder Ahoy!

Tell us about Bella Tyson, your heroine in Dead in Venice and Murder Ahoy!

Bella is a famous crime writer in her late 40s from South London. She dropped out of university and went off to have adventures, with a vague idea of writing about them. She loves chocolate, sex and travel, and her language can be pretty fruity. She’s probably my favourite character, as she’s the one most like me!

What do you love most about writing a series?

I love being able to introduce a character or a theme in one book, as maybe a sub plot or secondary character, and then expand on them in the next book. One of the main characters in Murder Ahoy! is talked about in the first novel and has had a profound effect on Bella in her past, but we don’t actually meet him until we’re onboard the cruise ship in book two.

What is the most challenging thing about writing a series?

I think the hardest thing is keeping it fresh. How many dead bodies can one woman come across without it sounding contrived?! I used to love ‘Midsummer Murders’ on the TV, but after a while it started to feel a bit daft – the murder rate in that cluster of small country villages was higher than that of New York!

You have been called the “mashup maven”. Tell us about how you bring genres together.

It all started when I tried to write something serious and it ended up being funny without me trying (if anything I was trying NOT to be funny). I can’t resist making it absurd or giving the characters witty dialogue. I’m also a sucker for romance and a happy ending. But as much as I love reading other people’s romcoms, and I adore the movies, I can’t seem to write a straight romcom. I think the frustrated filmmaker in me wants more action! So I gravitate towards writing mysteries, or romcoms with a darker edge. Readers seem to like a mash up but publishers, not so much sadly.

What are you working on now?

I’m working on a new series, The Nosey Parker Mysteries, set in Cornwall. Jodie ‘Nosey’ Parker is an ex-copper turned caterer who returns to the small Cornish seaside town she grew up in with her teenage daughter. She’s supposed to be retired from the force, but whenever there’s a crime she can’t resist sticking her nose in and helping solve it, along with hunky local CID officer Nathan, her old school friend, Tony, and a whole cast of colourful characters. The first book, Murder On The Menu, will be out in January.

Famous crime writer Bella Tyson is hired to co-host a Murder Mystery cruise, on a luxury liner sailing from Southampton to New York. She’s expecting an easy ride; fun and games, surrounded by amateur sleuths and fans of her books, all the while staying in a deluxe cabin and enjoying the spa and the amazing restaurants on board, culminating in a visit to one of her favourite cities in the world – the Big Apple.

She’s NOT expecting to be stuck on a boat in the middle of the Atlantic with her two least favourite people in the world, her hot but unfaithful bastard ex-husband Joel Quigley and fellow crime writer, bitch goddess and Twitter frenemy, Louise Meyers. And when real live dead bodies start turning up – as well as fake not-really-dead bodies – Bella’s dreams of being pampered on the high seas turn sour.

Accused of a murder she would have liked to commit but didn’t, and helped (or hindered) by a gang of unlikely detectives, can Bella find out who the real murderer is before the ship reaches its destination and New York’s finest drag her off?